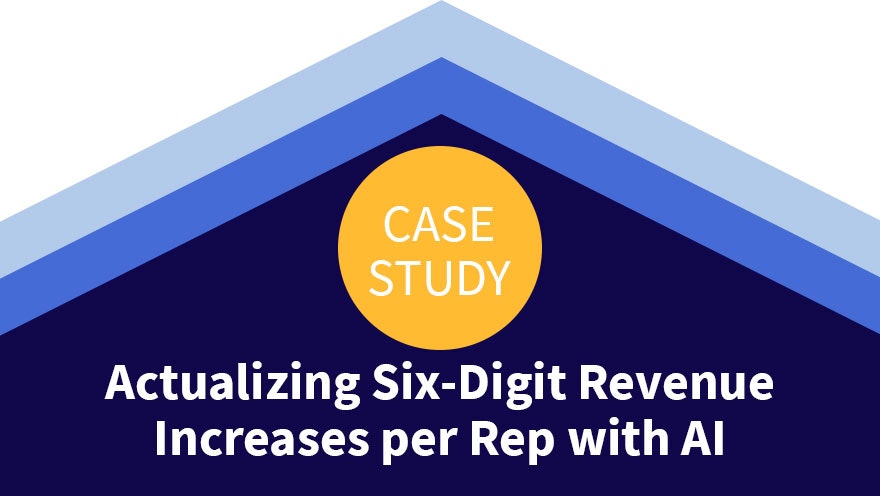 How Proton is Increasing Attributed Revenue $100k+ Per Rep, Per Year; at scale, Proton could help the company generate $10-15M+ per year in incremental revenue.

A very large distributor struggled with inside sales rep profitability. The company serves a huge number of industries- including manufacturing, chemical, energy, and industrial MROP. In order to provide customers with all the products and services they need, the distributor maintains a large inside sales team.

These inside reps must function as both inbound and outbound sellers, but while they occasionally made proactive calls to customers, they often found themselves receiving calls and registering orders. This was a problem as it meant inbound sales calls often lacked structure.

The distributor did not have a CRM tool, so when reps were making calls to buyers they had to plan for what to pitch and how to grow sales. If they could get the right person on the phone, they were able to sell proactively.

However, when reps were receiving calls they were truly unable to capitalize on sales opportunities; they had the decision-maker on the line, but couldn't push for up-sells or cross-sells, because they didn't have time to research the buyer and make personally

The distributor implemented Proton's AI-powered sales platform in an effort to boost sales. After integrating data from all of the distributor's channels, Proton's AI recommendation engine got to work predicting exactly when and what each customer was most likely to buy.

Proton's web application gave reps access to these recommendations in a simple, straightforward way. That way, when a customer called in, reps could get an instant suggestion for what to sell. Recommendations are specific to each customer and encompass items due for reordering, new product suggestions to expand share of wallet, and even complimentary items frequently bought alongside the customers' existing orders.

Thus, in addition to creating immediate sales, Proton also paved the way for further growth by tracking interactions to inform further sales activity. Reps will now be able to place calls knowing what a customer last bought, what they were pitched on, what call notes were recorded, and what they are likely to buy again. This helps inform who they should be calling (for any outbound efforts) and what to pitch or talk about when they talk to these customers.

enablement. Beyond increasing sales directly with recommendations, these features increase profitability by giving managers visibility into all accounts with AI-generated follow-ups, creating rep insight into open quotes for high-value pitching, and allowing reps to select which business line(s) they want to pitch.

Results and Next Steps

In order to accurately measure the effect of Proton's solution, the distributor rolled it out with a sample group of reps across five different locations. By testing Proton across industries and in multiple locations the distributor could compare sales outcomes made with Proton to those made by reps using traditional tools and knew they could trust their results.

In a three month trial, Proton proved its value and then some. In one season of selling, Proton was on pace to add $100k of incremental revenue per rep per year. Given the number of reps working for the distributor, it was estimated that this would equal an extra $10-15 million dollars in revenue annually when deployed company-wide. Even after gross margin had been factored in, Proton was still supporting an ROI in excess of 15x.

Another encouraging marker of success was rep usage. During the trial, reps left hundreds of call notes, created dozens of customer contacts, and worked Proton's CRM-like functions into their daily workflows. This means that as the year plays out, Proton should drive more and more revenue.

It certainly did during the trial -- reps improved user-adoption and sales in every successive month of the experiment. At the end of the trial, they were pacing to generate more than $100k of additional revenue. By the end of a year, who knows how high that number will be.

In the future, the distributor may also expand Proton's capabilities to outside reps or

e-commerce. While the specifics would look different at each point, the underlying premise will remain the same: giving customers personally-relevant, data-driven recommendations creates happier customers and higher sales.