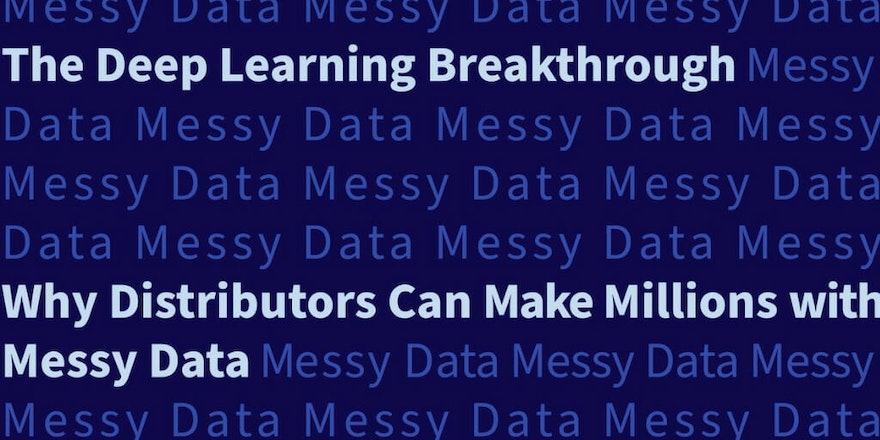 One of the most valuable resources distributors have is their data. Data can reveal what your customers are likely to buy, what growth opportunities you’re missing out on and where you can cut costs. Distributors with the right data can meet customer needs and dominate competitors. But acquiring and handling data properly is no easy task.

In 2016, Harvard Business Review estimated that bad data cost the US $3 trillion per year. This number is staggering, but not really surprising. The value of data is that it allows companies to predict the future by logging and analyzing the past. Some things are relatively easy to forecast. Others are extremely difficult.

Predicting customer behavior is one of the biggest challenges facing distributors today. To accurately forecast what each customer is going to buy, distributors need mountains of data relating to product information, customer behavior, firmographic and demographic details, and more. In the past, this amount of data was too messy for most distributors to really leverage. Today, however, companies finally have the right tools to sanitize and analyze the data.

Last year, a McKinsey report estimated that advanced analytics would unlock between $3.3 and $6 trillion of value for marketing and sales. AI was estimated to contribute between $1.4 and $2.6 trillion of those gains. In other words, advances in AI will allow companies to finally capitalize on their data. To explain how these new techniques will unlock millions of dollars in revenue for distributors, here is an example of the same technology applied in computer vision.

Image recognition has long been used to assess the status of AI. In the last decade, there has been a lot of hype around computer vision programs that can classify animals. For example, programmers recently designed artificial intelligence that could automatically detect, label and count wild animals photographed on hidden cameras. After exposing the program to 3.2 million labeled photos of animals from the Serengeti, they found that it could accurately give correct classification to new images.

This was exciting, because it proved that AI could analyze clean data to produce accurate results. So, while distributors might not care that a computer can tell the difference between eight gazelles and six wildebeests, they should certainly care about the processing power of AI. If you consistently feed a program the right data, it can learn enough to make accurate predictions on its own.

Translate this to a distribution context and you can see how it would be useful. If you fed an AI program enough data on accounts that had churned, it would begin to see shared characteristics amongst unhappy customers. This could be used to create a churn risk feature that flags accounts before they churn, giving distributors an opportunity to save that business.

This is great, but it relies on having clean data. If you don’t have a lot of sanitized data, such features become impossible to construct. Until now.

Earlier this year, Adobe rolled out a new research project called “Sharp Shots.” The AI-powered image processor unblurs photos and videos with just the click of a button. Amazingly, the service does not require any parameter tuning, only deep learning. This means that the program is able to effectively process the raw, real-world data in photographs without any assistance from a data scientist or technician.

Sharp Shots visually demonstrates that deep learning (a specific type of AI) is now advanced enough to denoise data itself.

The images above demonstrate the power of AI. On the left is an unprocessed image taken from a moving vehicle. On the right is that same image after it has been processed by sharp shots. Without being instructed on what it is looking at or what it is supposed to do, the AI engine behind Sharp Shots has transformed a blurry picture into a clear one. It has effectively sanitized its own data.

Imagine that you were trying to give this image the aforementioned animal-classification program. It is likely that a blurry image, like the one on the left, would confuse the program with its irregularities. However, the second, clearer image would have a much better chance of being accurately classified. This is because the first photograph would look dissimilar to the data that the system had been trained on.

Remember, the animal classification program needed to see 3.2 million images of labeled animals before it could start classifying animals on its own. If it is given a blurry image that does not look like its training data, it will have little chance of accurately reading it. However, similar techniques to those powering Sharp Shot can solve this problem by minimizing noise and turning the data into something that the AI program was used to seeing.

Returning to the original example of a churn risk predictor, this means that distributors can now rely on AI to make noisy data usable and to use that data to drive results. Old linear models and less advanced applications of AI simply could not handle noise nearly as effectively.

This application of AI can be used for more than churn. Distributors can apply this to basically any function that they have pertinent data on. For example, distributors could use customer data to predict each buyer’s next likely purchase. Or they could use various sets of interaction data to figure out an ideal schedule for outbound sales pitches.

But the best thing that distributors can do is start using all of these tools at once. Now that deep learning programs can cut through the noise of excessive data, distributors don’t have to fear overloading their systems with bad information. Instead, they can aggregate all data — customer information, firmographic data, product data, transaction histories and so on — into one place for complete analysis. Then, they can use AI to push a coordinated sales strategy back to their channels. In doing so, distributors will finally make full use of their data and recover millions of dollars of lost opportunity.

Get industry insights and Proton news.